You are here: HomenextDocumentsnextMiscellaneous DocumentsnextGloucester Players and the Battle of the Somme

Gloucester Players and the Battle of the Somme 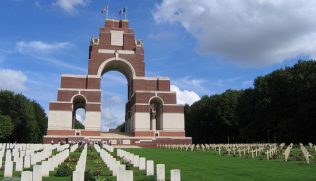 The Battle of the Somme and the Gloucester Players we lost.

Recently the national Great War commemoration has focussed on the centenary of the Battle of the Somme which along with Passchendaele became a symbol of the war in terms of mud, suffering and sacrifice. It should be recognised that the players from the Gloucester Club played their part in this battle and for many it would represent their first and last experience on the battlefield. Of the thirty Gloucester players who died in the war, eleven would lose their lives on the Somme. Although no players were involved on 1st July , the 8th Battalion, Gloucestershire Regiment and the 10th Battalion, Worcestershire Regiment moved into the front line on 2nd July, with the former regiment in particular having many of the Club’s players within its ranks. These regiments were tasked with the capture of the fortified village of Ovillers, a Day One objective which had resisted the first day’s attack thanks largely to the deep German dugouts in cellars of the ruined houses which had survived the week long British artillery bombardment largely unscathed. At 7.30 am on 3rd July as a new artillery bombardment ceased the battalions moved out of their front line trenches. The battle for the now dissolute ruins of Ovillers would later be described as a ‘soldiers’ battle’ which was fought hand-to-hand with rifles, bayonets, bombs and fists amidst poor visibility where it was difficult to discern friend from foe. By the time that Ovillers was in British hands, Harry Collins and John Price, both back row forwards would be dead while Arthur Saunders, another back row forward, would be awarded the Military Medal for bravery.

After three weeks of fighting on the Somme, the 5th Battalion, Gloucestershire Regiment with an even larger contingent of rugby players in its ranks and which had moved south from Flanders and held the line at Hébuterne, was ordered to launch attacks on the German front which had moved back a few miles to Pozières. Similar to Ovillers, Pozières had been fortified by the Germans who made good use of the cellars and the ruined buildings. The village was surrounded by a network of
connected German trenches and the 5th Gloucesters was specifically tasked with capture of a section of trenches just north of the main route into the village. These trenches made good use of the land and followed the high level contours around the end of Mash Valley which meant that an attack up the valley would be subjected to fire from in front and from both sides. Initial attacks had proved fruitless but on 23rd July a combined attack against all the outer defences of Pozières was launched by the 1st Australian Division and the British 48th (South Midland) Division, the latter containing the 5th Gloucesters. At 12.30 am the troops left their trenches and advanced up Mash Valley towards the German trenches which were about three rugby pitch lengths away. Despite the darkness, the attack was soon discovered and the Germans who held the high ground were able to bring significant rifle and machine gun fire down onto the Gloucesters, a situation made even worse by several previously undetected and therefore unmolested machine gun emplacements. The British Official History
related that the men had been “…literally mown down…” The following day the Germans moved back into Pozières, abandoning the trenches of the previous day’s fighting. The Reverend George Helm, the 5th Gloucesters’ Chaplain and vicar at All Saints Church Gloucester, described the scene on reaching these trenches. He recounted how, despite several attacking waves, only four soldiers from the Gloucesters had reached their objective – three of them were the rugby players, Syd Millard (second row) and the brothers Tom (stand off) and Melville (back row) Lewis. A fourth player Sidney Sysum (centre) was found on the parapet, killed in the act of jumping down into the trenches. A fifth player, James Griffiths (second row) lay dead in no-man’s-land. Amongst the wounded were many rugby players including Albert Cook (back row) whose leg was amputated after he was hit with what he would later describe as an “…exploding bullet..”

While the 5th Gloucesters had attacked at Pozières, on 23 July, the 8th Battalion, Gloucestershire Regiment, a mile or so further south, attacked the Switch Trench at High Wood which resulted in the death of another player William Nelmes (second row) who was hit by a shell fragment. After a few days rest, the attack on High Wood was resumed on 30 July which resulted in Hugh Thomas (back row) becoming the ninth player to die on the Somme. Subsequently the 8th battalion was pulled back to dugouts near Ovillers for a period of rest and to draft in new soldiers to bring the battalion back up to fighting strength. However the dugouts were still within the range of the German artillery and a direct hit on 1st November resulted in the death of Arthur Saunders whose Military Medal won in July at Ovillers was subsequently presented posthumously to his mother at a ceremony held at College Green in Bristol.

On the following day the troops of the 2nd Worcesters in the front line made another attack on the German trenches at Le Transloy but inter-locking machine gun fire decimated the attack which wounded Oscar Walwin (full back) who had joined the Club in the last season before the war. He was evacuated to a base hospital at Rouen to stabilise his wounds before transfer to England for further treatment. He sent several reassuring postcards to his parents in Gloucester but his condition deteriorated and his parents were advised by the War Office to travel to Rouen to be at his bed side.
However they were prevented from boarding the ship at Southampton docks as just before they sailed a telegram arrived informing them that he had died.

Of the eleven players who died on the Somme only Oscar Walwin has a known grave. All of the other players are commemorated on the Thiepval Memorial to the Missing of the Somme, 1916 which was the focus of the national act of remembrance on 1st July 2016. Although many of the men were buried in ‘known’ graves in 1916, the battlefield was the scene of heavy fighting again in 1918 and as a result all of the graves were lost. Although the Battle of the Somme was seen nationally as a serious setback its impact was acutely felt locally where not only did many of the rugby players
become casualties but so did many other men from the City of Gloucester and the surrounding county.