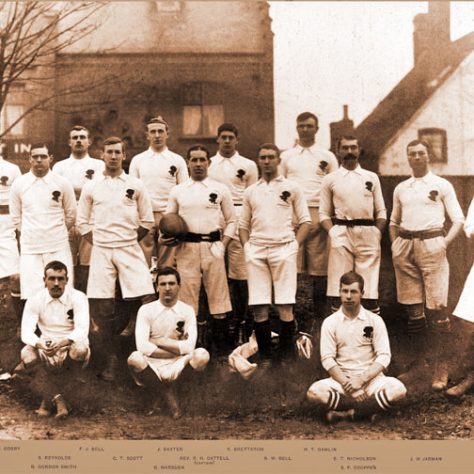 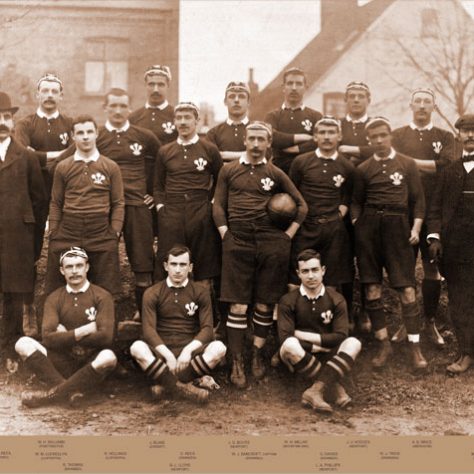 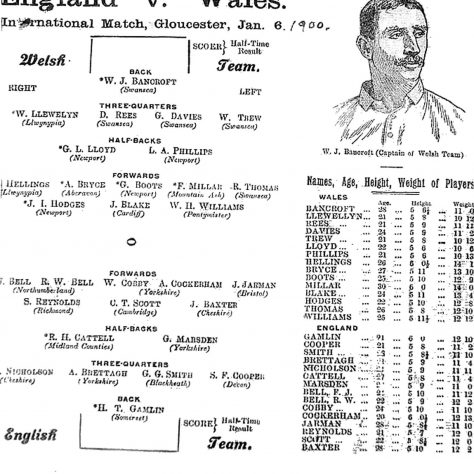 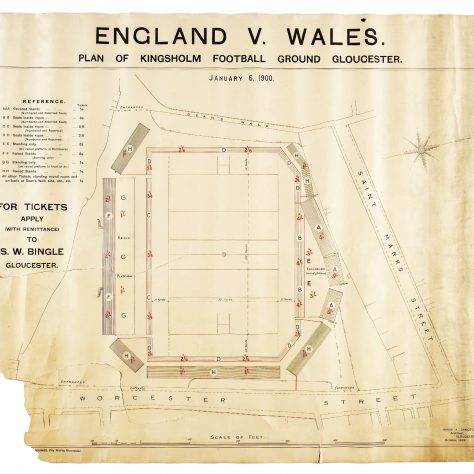 In 1900 England had no permanent home venue for internationals (that came with the move to Twickenham in 1910). Prior to that, although Blackheath and Richmond were the favoured grounds, clubs could apply to hold internationals, which could prove to be big money spinners for the club concerned.

Gloucester were an ambitious club with big plans to improve their ground and it was with that object in mind that in autumn 1899 they successfully applied for the England v Wales international, which was to be held in January of the following year.

The preparations were elaborate and thorough and were much praised by both the Rugby authorities and the press.

The match was eagerly awaited in the city and the press coverage was extensive. Photographs and profiles of the players appeared on the front page of the Citizen on match day.

The pre-match events, including the collapse of a temporary stand, are vividly described in the Citizen.

The match itself was meticulously reported in the Citizen.

Action photographs of the match appeared the following week in The King magazine.

In addition there was comment from all sides including the captains and the referee (reporting was every bit as intrusive in 1900 as it is today – and probably more entertaining!).

The impact on the city was considerable and the whole event is in itself a piece of social history.

However, far from providing the hoped-for bonanza for the club, only 3517 tickets were sold in advance and with total takings of only £934, the Gloucester club made a loss of £665. Three reasons were put forward for the loss:

The first was that the Welsh supporters failed to turn up in the numbers forecast.

The second was that the minimum stand ticket price of 2 shillings and ground entrance price of 1 shilling (imposed on Gloucester by the RFU who also insisted on a guarantee of £300, irrespective of takings) discouraged those locals who were not dedicated Rugby followers but might have been expected to support such a prestigious major event in their city.

The third was the lack of local players. J. W. Jarman, the popular Bristol captain, was a late selection for the match, which was his only international. This was thought by some to be a last minute attempt to drum up interest amongst Gloucestershire supporters.

The loss to Gloucester was crippling. At the AGM the preceding autumn, the treasurer had reported a balance of £709, which it was expected would be handsomely augmented by the profit from the game. Instead it was virtually wiped out and the effect was still being felt 20 years later.

The RFU, in a half-hearted attempt to assist the club, awarded Gloucester a match with the Barbarians, which was played on Maundy Thursday, April 12 1900. It should have been a great day in the club’s history, but turned out to be a damp squib. The match was scheduled to start at 5.15, but started late and was played in driving drizzle. It was a very weak Barbarians side, containing just four internationals and no player who had played in the match at Kingsholm in January. Gate receipts were a mere £35 and although Gloucester scored three tries to win the match 13-0 they could gain little comfort from the event.