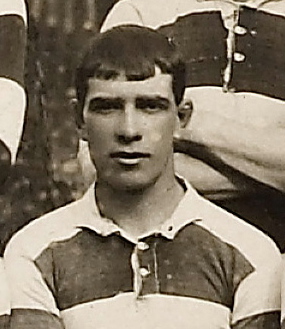 Frederick (‘Fred’) Thomas Oswell was born in Gloucester in 1877, the son of Joseph Oswell (1836-1877), a Dock Labourer and Harriet Oswell (née Martin) (1841-1918). The couple had married on 21 November 1857 at St James Church and had eight children, six of whom survived into adulthood. Fred was the last child born as his father, Joseph, died in 1877, the year of his birth.
Joseph’s brother, Benjamin Oswell was the father of Fred’s cousin, James Neviett Oswell.    Fred initially lived with his widowed mother in New Street but by the age of 14 years he was living with his elder sister, Kate, and her husband in Stroud Street. After leaving school Fred became a Railway Servant but eventually was employed as an Iron Moulder and then a Deal Carrier. On 14 July 1900
Fred married Clara Pugh at St Lukes Church and the family lived in Theresa Street. The couple had two children but both died in their first year. During the Great War Fred was called up and posted on 28 August 1917 as Private, 353694, 385 (Home Service Employment) Company, Labour Corps. He did not serve overseas and was discharged from the Army on 25 May 1918 with a debilitating illness for which he was awarded a Silver War Badge. Fred, as a forward, played 133 games for the Gloucester First XV between 1897 and 1905, scoring 24 tries and 27 games for the Gloucester
Second XV between 1897 and 1904 scoring 7 tries. He was also awarded 9 Gloucestershire County caps between 1898 and 1903. After retiring from the game he continued to be engaged in local rugby and in 1921 was engaged as the Coach for the Gloucester Old Boys. He was also an enthusiastic boxer and as a member of the Gloucester Gymnasium had several bouts, reported in the newspapers, against his brother William (‘Will’) in the 1901 to 1902 period. Fred died at the Gloucester Royal Infirmary after a long and painful illness on 30 March 1935 aged 58 years. His wife,
Clara, re-married to William Price and died in 1944 aged 64 years.

James Neviett Oswell was born in Gloucester on 25 October 1865, the son of Benjamin Oswell (1838-1903), a Labourer and Harriet Susan Oswell (née Gardner) (1840-1885). The couple were married on 26 December 1874 and had ten children, seven of whom died in infancy. James’ father, Benjamin, was the brother of Fred’s father, Joseph, so James was the cousin of Frederick (‘Fred’) Thomas Oswell. James’ mother, Harriet, died in 1885 and shortly after his father re-married to Elizabeth Light (née Watts). The family lived in Westgate Street and James earned a living at the Flour Mills as a Timekeeper. On 23 December 1888 at St Michaels Church, James married Fanny
Maud Lees from Cinderford; the couple did not have any children although Fanny did have a daughter, Mary Ann Lees who was James’ step-daughter; on census returns she is listed as Mary Ann Oswell. James, a fullback, played 43 games for the Gloucester First XV between 1885 and 1894 and 63 games for the Gloucester Second XV between 1887 and 1895, scoring 5 tries; he captained the Second XV in the 1894-1895 season. He was also awarded 4 Gloucestershire County caps between 1885 and 1887. For three years (c.1891-1894) James lived in Birmingham before returning to
Gloucester and during that period he played rugby for Moseley; in 1894 however James played for the Gloucester Second XV against the Moseley Second XV. James was also an enthusiastic cricketer and as a slow bowler he was described as “…almost unplayable on certain pitches….” James died on 18 January 1904 only 39 years of age. His wife, Fanny, re-married Arthur Ansell Dix and she died in Gloucester in 1934 aged 68 years.