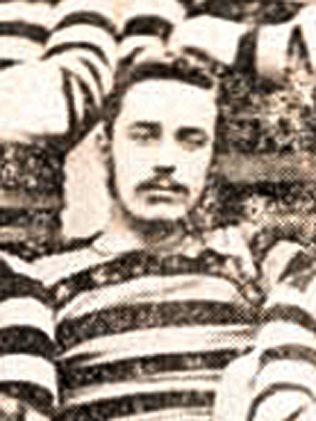 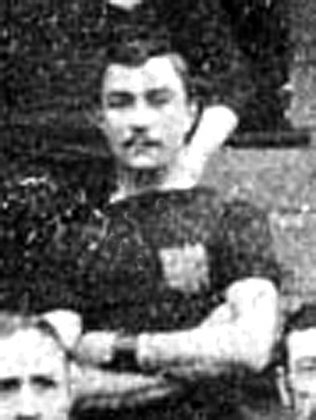 Frank Tandy was born in Gloucester in 1858 and baptised on 13 August 1858 at St Aldate’s Church. Initially Frank lived with his parents but after the death of his father he moved to The Jolly Waterman at Walham, a brick works run by his widowed aunt Maria Tandy. She lived there with her daughter and Franks’ cousin, Laura Tandy. On 12 July 1883 at St Mary de Lode Church Frank married his cousin Laura; the couple did not have any children. Eventually they moved to Sandhurst Road, Gloucester. He continued to be employed as the manager of the brick manufacturing yard. Frank, a forward, played 29 times for the Gloucester First XV between 1877 and 1879, scoring 2 tries. He was a keen sportsman and besides rugby participated in cricket, athletics and golf. He died unexpectedly on 19 January 1924 aged 66 years – he had attended the Gloucester versus Pontypool match in the afternoon but feeling unwell left the ground before the final whistle and, whilst at home resting on the sofa, he suddenly passed away; he is buried in the churchyard at Twigworth. His wife Laura died two years later on 2 December 1916 aged 71 years.

Ernest Daniel Tandy was born in 1864 at Gloucester and baptised on 24 April 1864 at St Aldate’s Church. For a while Ernest lived with his aunt and uncle, Emily and Henry Merrett at their farm in Quedgley but moved back to Mitre Street to live with his now widowed mother. Ernest worked as a Coach Trimmer. On 1 December 1887 he married Mary Selina Louisa Heath at St Peters Church, Framilode. The couple had three children but all three died in infancy aged 6 years, 17 weeks and 51 days. By 1901 Ernest was a Licenced Victualler at the Adega Vaults in Northgate Street. After the death of his last child in 1900 he decided to raise money for the local Children’s Hospital. He invited all his customers to donate a penny by wrapping it in coloured card with a small spike on it and then flicking it up to the ceiling – within a week more than 1700 pennies were stuck to the pub ceiling, all of which were donated to the hospital. He was too old to fight overseas in the Great War but devoted a lot of time and enthusiasm to serving with the Gloucester Volunteer Training Corps (the Great War equivalent of the Second World War’s Home Guard). In particular he was detailed to guard the munitions factory at Quedgley thereby freeing up regular troops to fight overseas. After the war the family moved to Painswick. Ernest, a forward like his brother, played 100 times for the Gloucester First XV between 1882 and 1892, scoring 22 tries. He was also awarded 2 Gloucestershire County caps. Ernest spent his last years as an invalid and died on 20 November 1930 aged 66 years; he is buried in Painswick Cemetery. His wife, Mary, died in 1947 at Stroud aged 83 years.