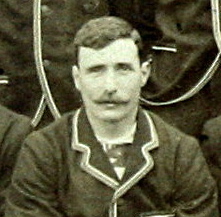 The sons of William Williams (Gloucester, 1830-1885), a Labourer, and Ann Williams (née Griffin) (born 1832 in Herford). The couple married at St Marks Church, Gloucester on 28 May 1855 and had five children, all of whom survived into adulthood. The family lived in Alney Terrace, Pool Meadow in Gloucester

Alfred Charles (‘Charlie’) Williams was born in Gloucester on 20 April 1866. Along with his brother, John (‘Jack’) William Williams, he would play for Gloucester. On 25 December 1891 at St George Parish Church, Redland, Bristol he married Annie Williams and the couple lived for a period in Sherborne Street, Bristol. However by 1901 the couple had moved to Gloucester and lived with Charlie’s widowed mother. They had two children although one was still born. Charlie initially worked as a Deal Porter for Price Walker and Company Limited before becoming the Landlord of the Theatre Vaults in Westgate Street where he remained from 1902 to 1941 and was helped by his wife and surviving daughter, Phyllis. From 28 February 1940 until 31 December 1945, Phyllis created a fund for the servicemen who were customers or sons of customers and raised 2,942 5 shilling postal orders and other gifts, worth a total of £890 8s 9d (equivalent today of £31,656 using TNA converter); each of the postal orders and gifts were accompanied by a personal letter from Phyllis; in total she wrote 2,942 letters.  In 1946 following the return of the servicemen, she organised a social evening for them and in recognition and gratitude of her efforts, the servicemen presented her with gold bracelet composed of badges of the fighting services. Charlie, a forward, would play 224 games for the Gloucester First XV between 1889 and 1901, scoring 24 tries; he captained the side for the 1895-1896 season. He was also awarded 5 Gloucestershire County caps between 1889 and 1891. He gained an English trial but was injured during the match which the Citizen speculated cost him his England cap. When he retired the Citizen reported that he had “…a lengthy and honourable career [with] no unpleasantness with any member of the team” and on his 83rd birthday would describe him as the “Grand Old Man of Glo’ster Rugby”. He continued to support Gloucester regularly attending the matches at Kingsholm until shortly before his death. In March 1946 a dinner was organised by Arthur Hudson at the Midland and Royal for Club for officials and players to celebrate the recent wedding of his son, Gordon Hudson; Charlie proposed a toast to the Gloucester Rugby Club while another former captain, Tom Millington, replied. Musical entertainment was provided by various people including John Embling, Roy ‘Digger’ Morris and John A’Bear. Besides rugby Charlie was also well known as a rower within the city for the Wanderers Club, a rowing club attached to the Wanderers Rugby Club, and won numerous trophies at various regattas. Charlie died in Gloucester in 1954 aged 88 years while his wife, Annie had died nine years earlier at Gloucester on 5 September 1945 aged 74 years.

John (‘Jack’ William Williams was born in Gloucester in 1863. Along with his brother, Alfred Charles (‘Charlie’) Williams, he would play for Gloucester. Jack lived with his family and continued to live with his mother after the death of his father. He was employed initially as a Labourer then as a Deal Porter. He never married. Jack, a forward, played 83 games for the Gloucester First XV between 1888 and 1893, scoring 5 tries and 3 games for the Gloucester Second XV between 1888 and 1890, scoring 1 try. He was also awarded 4 Gloucestershire County caps between 1889 and 1892. Jack died on 16 October 1931 aged 68 years. His obituary and death notice does not mention a wife but does draw attention to the fact that he and his brother Alfred Charles (‘Charlie’) Williams, “…were members of Tom Bagwells famous team of 1890-91 [which lost only 3 games] in the last season at the Spa…” and that Jack “…played in the opening game at Kingsholm and scored one of the tries in the first match against Burton.”