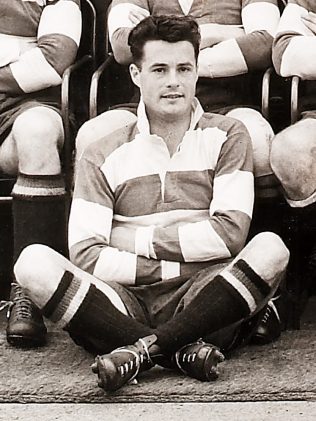 Local boy David played most of his rugby for Gloucester at fly-half, although he occasionally played in the centre.  Players were not so big in those days, and David tipped the scales at just 11 stones.

David William Jones was born on 30 December 1930 in Gloucester.  He went to the Central School, and made his debut for Gloucester as an 18-year-old on 2 April 1949 against Llanelli, not the easiest of teams to start your career against.  He then did his National Service in the RAF, where he played for his Command XV, and had a trial for the full RAF team.

It took a few seasons before David established himself in the first fifteen at Gloucester, but by 1954-55, he was the regular fly-half appearing in 31 games.  He played for Cheltenham in the 1955-56 season, but was back at Kingsholm for the following campaign.  On 2 March 1957 he kicked a hat-trick of drop goals in the course of Gloucester’s 12-6 win over Northampton, and later in the month scored two tries when Gloucester defeated Newport 12-6, to gain the first double over the Welsh club since the 1932-33 season.

In his Gloucester career David played in 80 games, scoring 17 tries and 84 points in total.

David played 10 times for Gloucestershire, his first cap was against British Police on 28 September 1954, when he scored a try, and his first County Championship appearance was on 9 October that year against Cornwall.