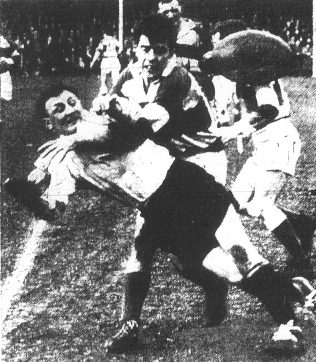 zoom
Denis Ibbotson gets his pass away. Gloucester v Pontypool March 1959. Owing to the clash of colours Gloucester played in white shirts
Citizen

Denis Ibbotson (“Ibbey”) was an open side wing forward, and also hooker and prop in his early career, who played 339 games for Gloucester from 1950 to 1960 and also for Gloucestershire and Western Counties.  He was a crowd favourite, frequently scoring opportunist solo tries, and was a fierce tackler, tackling low and hard.

Denis M Ibbotson was born in Gloucester in 1930 and educated at Central School where he captained the 1st XV and Gloucestershire Schoolboys. After leaving school, he played for the Old Centralians. His younger brother Kenneth also played for Gloucester from 1955 – 1958, at three quarter or outside half, before leaving to join Cheltenham.

Denis joined Gloucester in 1948 and made his debut for the 1st XV on 7 January 1950 against London Scottish standing in for George Hastings at prop. He played in the front row for the rest of that season, but after appearing there against Lydney in the opening game of 1950-51 he moved to the back row, first at Bristol where “Ibbotson was always prominent” in a 9-3 win and then at Newport the following week where he was “the mainspring of two vigorous attacks.” He was now established in the back row and and became a regular first choice.

“Ibbey” soon found his form at the start of the 1951-52 season and was “again one of Gloucester’s best forwards” with his try “a fine solo effort” in an 11-6 win against Moseley. Two days later he scored a “typical opportunist try” in a 9-3 win over Waterloo. His reputation as a deadly tackler who was capable of making unstoppable dashes for the line was becoming established.

The following season he made his county debut and in October 1953 he played for Western Counties against the All Blacks at Bristol in front of a record 20,000 crowd. The Counties went down 11-0 in what The Times described as a “brave battle.” Later that season he played for Gloucestershire in a losing semi-final against Middlesex at Twickenham. He played again for the county in 1954-55.

Denis Ibbotson was a first choice for Gloucester for the next four seasons. In his last full season 1958-59, he played in the club’s first-ever game against Italian opposition (a 23-3 win against Milan in front of 10,000 at Kingsholm) and was travelling reserve for the CountyChampionship final against Warwickshire. On February 14 “Ibbotson excelled” said the Citizen in a 3-3 draw at Bath. Terry Hopson, who was playing outside half for Bath in that game, still remembers Ibbotson’s fierce low tackling.

On September 9, 1959 he scored a try in an 18-8 win for Gloucestershire at Bristol in a friendly against French side Auvergne-Limousin. He played in all six games for Gloucester before injury ruled him out at the start of October. Two attempted come backs followed but by the time he was fully fit two months later, Dick Smith had established himself in the open side position. Denis returned for a couple of games late in March and was selected for the April tour to New Brighton and Sale, before retiring at the end of the 1959-60 season..