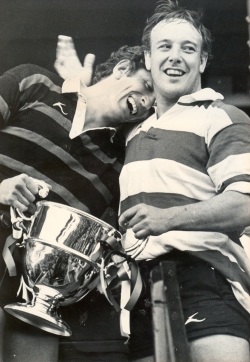 zoom
The one that got away. Moseley and Gloucester captains share the cup - the one thing that Gloucester didn't win in 1981-82

Steve Mills was a hooker who played 300 games for Gloucester between 1975 and 1986. He captained the club from 1980 to 1983. During the 1981-82 season, which was arguably the most successful in the club’s history, he captained Gloucester in 40 of the 48 games played, including the John Player Cup Final at Twickenham. Mills also played in the victorious 1978 John Player Cup side. He was capped five times for England but would have won many more caps today. As understudy to England captain Peter Wheeler he appeared many times on the bench in the days when substitutes rarely got on the field. He appeared 24 times for Gloucestershire, playing in the two losing finals of 1978 and 1980 before he was on the winning side at Twickenham in 1984. Mills appeared three times for South and South West against the All Blacks and twice against the Wallabies. He captained England B and was a Barbarian.

Stephen Graham Ford Mills was born in Cirencester on 24 February 1951 and was educated at Cirencester Grammar School and North Gloucestershire Technical College. He joined Cirencester RFC from school, captaining the side and touring the USA with them.

Steve joined Gloucester in 1975-76 and quickly made his debut against Cheltenham, playing 11 first XV games in his first season. He made his debut for Gloucestershire against Japan at the start of the following season and was a reserve for both England trials. In summer 1977 he toured America with the Gloucester side.

1977-78 was a great season for Gloucester which ended with general recognition as the premier side in the country. Steve Mills played divisional rugby and played for Gloucestershire on the losing side in the county championship final. He was a member of the team that played throughout Gloucester’s successful John Player Cup campaign. In the following season he played for the South and South West against the All Blacks and for the Barbarians against Penarth and Cardiff on their South Wales tour. In 1979-80 he again played for South and South West against the All Blacks, played for Gloucestershire in their losing final against Lanacashire and played for The Rest in the Final England trial.  He was firmly established as one of the top three hookers in the country.

Steve Mills’ dedication to the game was remarkable. In 1980-81 he became Gloucester captain. He played county and divisional rugby, was chosen for England squad training, captained England B to victory over Ireland B, appeared on the bench for England against France, played again for the Barbarians and still put in 38 appearances for his club. England recognition came at last with an England tour of Argentina that summer, where he played in both internationals.

1981-82 was a triumph for coach Dick Smith, captain Steve Mills and the Gloucester team. Only three matches out of 48 were lost, and the club became the first English side for five years to win the Daily Mail Anglo-Welsh pennant. Gloucester also reached the John Player Cup Final where a 12-12 draw after extra time resulted in the cup being shared for the only time. Steve Mills played for South and South West against the Australians at Kingsholm and was on the bench for England. At the end of the season he was chosen for the England tour of North America.

In 1982-83 Steve Mills was chosen for The Rest against England in the Final Trial and seemed destined for the bench again when Wheeler was injured. Mills seized his chance and played well against Wales at Cardiff in a 13-13 draw, but returned to the bench for the Ireland game.  The following season Wheeler became England captain and Mills remained the No 2. He played for a third time for the South and South West against the All Blacks and played for Mike Rafter’s victorious Gloucestershire side in the 1984 County Championship Final at Twickenham.

Mills, Blakeway and Preedy of Gloucester formed the England front row for the first test against South Africa that summer but England were badly beaten and all three were dropped for the second game. In September Steve played for England against the RFU President’s XV in the match to celebrate the start of Twickenham’s 75th year and in November played his last game in an England shirt against Australia. He also played for South and South West against the tourists. His appearances for Gloucester and the county were now fewer and he retired the following season after an outstanding career.