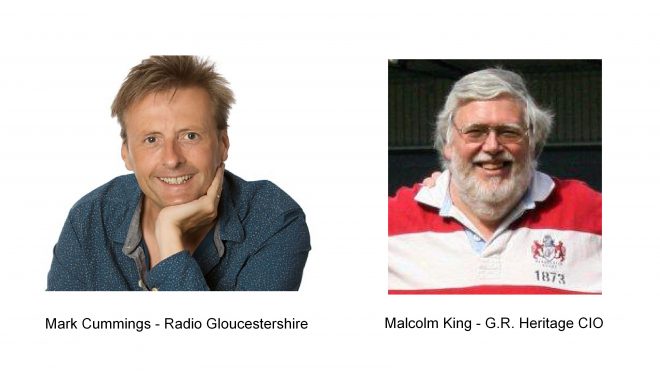 During the interview Malc explained the origins of the club and where the early matches were played, the significance of 1891 and the colours of the early kits.

The interview was preceded with a few words from Graham Spring, long time stadium announcer at Kingsholm, and 10 clips of match commentary and interviews with former players.   See how many of the clips you can identify:
Clip 1: Who was it that didn’t feel good enough?
Clip 2: When might Richard Mogg have scored in the corner?
Clip 3: When might Peter Butler have scored from the touchline?
Clip 4: Who went up and down on the same day?
Clip 5: Who’s best rugby was playing for Gloucester?
Clip 6: When did Andy Deacon receive the Powergen Cup?
Clip 7: Who were the opponents when Sinbad passed to James Bailey who scored?
Clip 8: When did James Forrester dribble through to score?
Clip 9: Which match did May pass to Twelvetrees who scored?
Clip 10.  When was Ackerman on his feet?

There’s no prizes for getting them all right.   However, if you do you can certainly feel good about yourself.