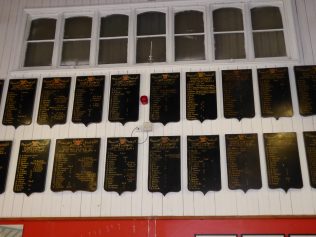 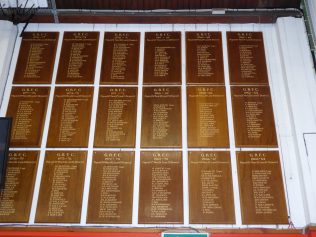 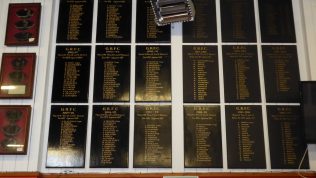 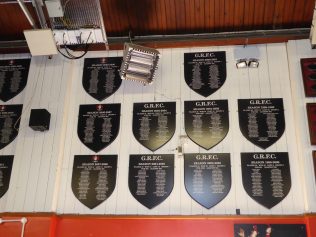 These are the team honours boards which hang on the walls of the Lions’ Den, formerly the gymnasium, at Kingsholm.    There are several variants.

The earlier boards (up to 1960/61 season) are roughly rectangular in the shape of a shield with gold lettering on a very dark background.

From 1961/62 season to the 1979/80 season the boards are rectangular with gold lettering on a varnished light oak surface.

From 1980/81 season to the 1997/98 season the boards are of a similar rectangular size with gold lettering on a black background.

The boards from 1998/99 onwards are in the shape of a shield with white lettering on a black background.     These most recent boards contain the names of the full squad  whereas the earlier boards show the regular first team players.

All the boards contain the seasons’ results of wins, losses and draws.

The boards up to and including the 2015/16 season have been transcribed (see separate files which can be accessed via the links on the right or below).   The more recent boards will be transcribed when the boards have been put on display in the Lions’ Den.