You are here: HomenextDocumentsnextDocuments Relating to the ClubnextHistory of Ladies' Tickets 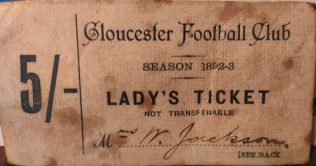 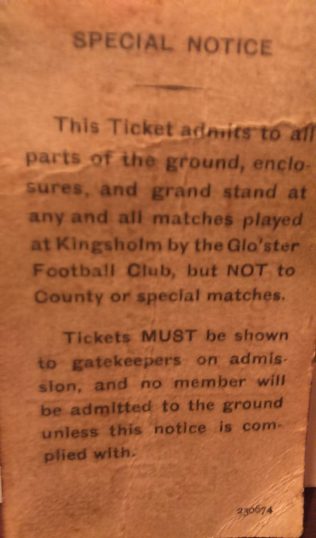 zoom
Mrs Helen Jackson's ticket Reverse side. Issued at the start of the 1892-93 season.

At a meeting on the 15 September 1873 at the Spread Eagle Hotel the Gloucester Football Club (referred to throughout as Gloucester Rugby Club) was founded. On that night forty-five members, all men, were enrolled with an entrance fee (one-off joining fee) of five shillings and an annual subscription also of five shillings. However from its inception the Club wanted to be inclusive and appealed to ladies and juveniles to come and support the team. Predominantly the games were played at the Spa Field with its cricket pavilion providing an elevated view of action on the field; it is still the home of Gloucester Cricket Club situated next to Gloucester Park (There is a detailed account of The Spa in the Places/Before Kingsholm/The Spa section of this website).

Initially there was no charge for admission to watch the games although the Pavilion was reserved for ladies. However there were charges levied for a few games where Gloucester had incurred significant expenses entertaining teams, notably the London-based Flamingoes on 12 February 1876 and the Birmingham-based Handsworth on 8 February 1879; for the latter men were charged six pence (‘Pavilion side’) and three pence (‘Park side’) while the Ladies enjoyed free admission. But it became apparent there were significant, unsustainable expenses involved with the running of the Gloucester Club and inevitably admission charges were introduced on a regular basis for every game. In September 1882, ahead of the new season, the first advertisement listing regular admission charges appeared in the Citizen. The charges for the Pavilion side were set at six pence for men and three pence for ladies while the Park side was two pence for men and free to ladies. The same advertisement also listed the annual subscription charge which was fixed at five shillings for men and a new charge of two shillings and six pence for ladies season tickets. Under these rules men as Members were entitled to entry to the matches with no additional admission charge and granted voting rights at the Club meetings while the ladies’ season ticket only entitled them to entry to the matches with no additional admission charge. These subscriptions were obtainable from the Pump Rooms which at that time stood in Brunswick Road. At the beginning of the 1883-84 season, following some complaints about behaviour in the Pavilion – or as it was now being referred to, the grandstand – an additional levy of three pence was charged for its use in an attempt to ‘price out’ the rowdier elements amongst the Gloucester supporters. This levy also applied to ladies, who were not season tickets holders, who otherwise still enjoyed free admission to the matches provided they did not wish to use the grandstand. Subscribers, regardless of sex, were still admitted to the ground and grandstand for ‘free’. These charges covered the home games for both the First and Second XVs and would stay in place for the eight remaining years that Gloucester played at The Spa. By 1890 the Club requested that all Members should respect the two front rows of seats in the upper part of the pavilion which were now reserved for ladies. The annual subscription charges for membership of the Club remained static throughout the years at the Spa at five shillings for men and two shillings and six pence for ladies and junior members. The membership cards, initially obtainable from the Pump Rooms, were also made available at the Tobacconist at The Cross and by October 1889 directly obtainable from the Club’s Honorary Treasurer, Sidney S. Starr at Roberts and Starr’s florist shop at 92 Northgate Street.

Following a three year search for a new ground the first game at Kingsholm was played on 10 October 1891. As well as the purchase price of the ground there was an on-going programme to clear the ground, lay a suitable playing surface and erect fences and viewing points, all of which represented as significant cost to the Club (There is a detailed account of Kingsholm in the Places/ Kingsholm/1891/92: A New Ground and a New Pavilion section of this website). The advertisement for the first match set the admission charges at six pence for the Worcester Street side and three pence for the Dean’s Walk side while there was an extra charge of six pence for entrance to the grandstand; the annual subscription charges remained unchanged prior to the start of the 1891 season. However it was inevitable that these prices would increase and by December the admission charges for the First XV matches were doubled to one shilling for the Worcester Street side and six pence for the Dean’s Walk side although the addition charge for use of the grandstand remained unaltered at six pence with the insistence that all members had to show their cards in order the gain entrance to the ground; the Second XV matches remained at the original charges. There were however some games played by the First XV where the admission charge was the same as for the Second XV; in general these games were against new opposition e.g. Wakefield Trinity, Stratford-on-Avon and Exeter as in 1891-92 season.  In November 1891 the Committee announced that the annual subscription would be doubled to ten shillings for men and five shillings for ladies and juniors and this was to be discussed at an Extraordinary and Special General Meeting at the Spread Eagle Hotel on 7 March 1892. The increase was deemed necessary as a means of off-setting the rise in the ground rent to £275 a year which had been recently announced by the Athletic Club Company. It was argued by the Committee that the increase in the membership fees would cover the ground rental which would then result in the whole of the gate money going to the Club. Arthur Vears (Club Chairman) pointed out that at present Members had a good great advantage as they were able to see about forty matches a season for only about one and a half pence per game compared with ordinary spectators who had to pay six pence per game. However the proposal to double the subscription to ten shillings was objected to as it would to be unaffordable by the ‘working man’. As a consequence a two-tiered system was accepted with ten shillings and five shillings subscriptions. The ten shillings subscription would admit the holder to all parts of the ground including the grand stand and the enclosure while the five shillings subscription, aimed at the working man, was similar but would exclude admission to the grand stand and the enclosure. A juvenile, equivalent to the latter, was introduced at three shillings but had an age limit of fourteen years.  The price of the ladies season ticket was also doubled to five shillings. Further there was a discussion regarding the treatment of the Ladies who had been subjected to ‘disgusting’ language and many of whom had refused to attend again which would have an impact on Club’s revenue. It was hoped that the introduction of the new subscription and admission charges would alleviate this problem. These charges would affect the current subscribers of 817 Members (men) and 310 Ladies and Juniors and would remain in place until at least the end of the nineteenth century.

During this period it is apparent that other clubs, both football and rugby throughout the Great Britain were undergoing similar discussions and introducing subscription and admission charges that would induce all members of society to attend the matches; these included similar Ladies tickets. The latter recognised the fact that women were a significant part of the crowd who supported their husbands and boyfriends as well as purely enjoying the game and besides the were obvious benefits to the income of clubs; for some clubs e.g. Cardiff Rugby Club the ladies ticket would still remain free of charge.

The new ladies ticket was introduced at the start of the 1892-93 season and one of the first purchasers was Mrs Helen Jackson, the wife of Walter Jesse Jackson. On 10 August 1892 Walter had married Helen Elizabeth Griffiths at St Michael’s Church, Gloucester and it is clear that from the beginning Helen wanted to support her husband throughout his games for Gloucester. Helen’s ticket (see attached photographs which show both the front and reverse sides of the Lady’s Ticket) shows that it admitted her to all parts of Kingsholm including the grandstand for all of Gloucester’s home matches and included the First and Second XVs. Walter Jackson played in the three-quarters and made 97 appearances for the Gloucester First XV between 1889 and 1894, scoring 41 tries. He also made 10 appearances for Gloucestershire County side and was awarded 1 England International cap against Scotland in 1894. In 1893 Walter moved to Halifax where he continued in his occupation as a Riveter and later became a Boiler Maker. During this period he played his rugby for Halifax although he also played the occasional game for Gloucester. Walter suffered a series of bereavements in 1917 with his wife, Helen, dying on 2 June age 45 years , their son Walter killed in action on 9 June age 21 years and another son Milford killed in action on 25 August age 22 years – both sons were serving with the Machine Gun Corps and were killed in the Ypres Salient. Walter died in Halifax in 1 December 1958 aged 88 years.

The early evidence showed that Gloucester Rugby Club, as well as other clubs across the country, welcomed and actively encouraged women as supporters of the teams on the pitch. There is little doubt that this encouragement would ultimately lead to the active participation of women in this sport which today is now seen as the norm.

There is a detailed profile of Walter Jesse Jackson in the People/Player Profiles section of this website.

[Brian Jackson is the adopted grandson of Walter and Helen Jackson]

When charges were first introduced for certain matches at the Spa, it was thought necessary to erect canvas screens to ensure that sight of the game was restricted to those who had paid the entrance fee. This was not without problems – erection of the screens required council approval which could not be guaranteed, the screens themselves were not wholly effective in preventing those outside seeing in, and some spectators managed to evade the gatemen.

A temporary stand was erected in a hurry at Kingsholm for the first 1891-92 season on the east side of the pitch, which ran north-South at the western end of the ground. In the summer of 1892 the pitch was turned 90 degrees, and Enoch Clutterbuck built a new stand on the north side, which is what warranted the higher charges.