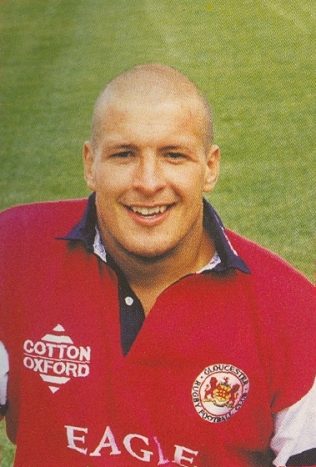 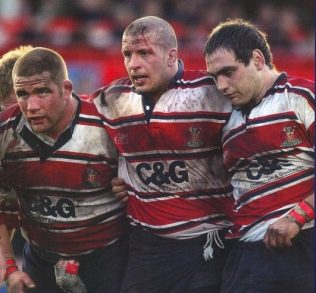 Christopher Paul Fortey was born in Gloucester on 25/08/1975 and is the identical twin brother of former Worcester Warriors prop Lee Fortey. Chris was a product of the successful Widden Old Boys junior section and worked his way up the ladder at Gordon League.  He first played for Gloucester Colts during the 1993-1994 season before joining the club full time in 1996, just as professional rugby was taking it’s first steps. During this period he also gained representative honors for the South West under 21 team as his potential began to surface. A combative and reliable hooker, Fortey made his debut for Gloucester on 19/03/1996 in a 21-12 defeat to Lydney, which is the last occasion that the two sides met. His first appearance in a Courage League game came as a replacement  against Orrell at Kingsholm on 08/02/1997 and he made his full league debut in the following game against Bristol. He was involved in a number of games from the bench for the remainder of the 1996-1997 season, including the Pilkington Cup semi final defeat to Leicester at Kingsholm. Fortey started the following season as third choice hooker, but injuries to Phil Greening and Neil McCarthey provided him with the opportunity to start regularly for the fist XV and score his first try for the club against Wasps, before McCarthy regained fitness and pushed Fortey onto the bench for the 33-25 Cheltenham and Gloucester Cup final victory against Bedford at Franklins Gardens on 03/04/1998. At the end of the season Fortey was called up to represent the Barbarians in 3 games played against the South American Barbarians. During the 1998-1999 season Fortey started both the Tetley Bitter Cup semi final defeat away to Wasps and the Cheltenham and Gloucester Cup Final victory against Bedford, which was again played at Franklins Gardens, having scored a try in the 45-37 semi final victory over Sale at Kingsholm.

By the end of the 2000-2001 campaign Fortey had firmly established himself in the Gloucester squad and his impressive form earned him a call up to the England A squad for the summer tour of Canada and the USA. The following season he helped the club to finish third in the Zurich Premiership table, before coming off the bench for Olivier Azam in the 77th minute of the 28-23 playoff final victory over Bristol Shoguns at Twickenham, earning the club a wildcard European qualification after Leicester finished top as champions. In 2003 Fortey started on the bench in the 40-22 Powergen Cup final victory over Northampton at Twickenham, a competition the club hadn’t won since 1982. By the end of the 2002-2003 season he had helped the club to finish 15 points clear at the top of the Zurich Premiership table for the first time since the league structure had been introduced in 1987-1988 and thereby reach the inaugural Championship final. However, Fortey missed the 39-3 final defeat to Wasps at Twickenham. The 2003-2004 season saw Fortey help Gloucester to a fourth place finish in the Premiership table, before starting the 44-35 Zurich Premiership wild-card semi final victory over Sale at Kingsholm, after which Gloucester forfeited their place in the wild-card final having been awarded the extra Heineken Cup qualification place created by London Wasps winning the 2003-2004 competition, due to being the highest placed team in the Premiership not automatically qualified for Europe.

Unfortunately Fortey badly broke his ankle at the start of the 2004-2005 season playing against Sale at Kingsholm, which meant he was as a frustrated spectator for much of the campaign. This signaled the end of Fortey’s time at his home town club having played 134 games and scored 20 points, and in the summer of 2005 Fortey who was now 31 years old moved to Worcester Warriors, where he joined up with his twin brother Lee who was already a key member of the Warriors squad. He made his debut against Gloucester in the opening match of the 2005-2006 season and in April 2006 he and Lee made league history against Newcastle, when they became the first twins to run out together for the same side in the Guinness Premiership. In November 2009 Fortey became only the fifth man in Premiership history to play 200 games, when at the age of 34 he came on as a late substitute in a 12-12 draw with Saracens at Sixways. Having languished towards the bottom end of the Premiership table for several seasons, Worcester Warriors were finally relegated from the Guinness Premiership in 2010. The following season Fortey was a key figure in helping the club to become Championship champions and regain their place in the Premiership, amassing 101 points and losing just one game in the process. In November 2010 he was once again called up to represent the Barbarians, this time against the Combined Services, scoring a try in a 46-21 victory for the invitational side. The vast experience he had gained over the years playing top flight rugby led to him being appointed the Stourbridge Saxons forwards coach for the 2011-2012 season, a role which also aimed to maintain the strong and developing link between the Saxons and the Warriors. The move into coaching meant Chris would find himself in the opposite dug-out to his brother Lee who was now forwards coach at Cinderford in the same league as Stourbridge. Fortey’s contract at Worcester expired at the end of the 2010-2011 season and after receiving offers from several other Premiership clubs he signed a new six month deal with the newly promoted Warriors to provide cover during the rugby world cup, splitting his time between the Aviva Premiership side and his duties at Stourbridge. During this period he proved he still had much to offer on the pitch, which led to the Worcester coach Richard Hill extending his contact until the end of the season. Fortey made his 155th and final appearance for Worcester Warriors on 05/05/2012 away against Northampton Saints in the Aviva Premiership, retiring from full time rugby in the process as one of the all time leading appearance makers in Premiership history, having played 127 times for Gloucester and 92 times for Worcester.

Having left both Worcester and Stourbridge and now aged 36, Fortey was announced as Hartpury RFC’s new skipper in August 2012 for the upcoming season. Once again finding himself in the same league as twin brother Lee at Cinderford. Hartpury’s Director of Rugby, Alan Martinovic, convinced the veteran to join the National League Two South club after he became a member of the building staff at the college, making use of the carpentry apprenticeship he gained as a teenager prior to signing for Gloucester.