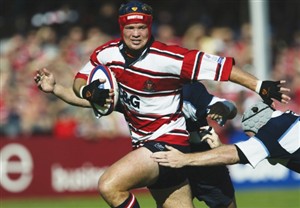 Jacobus (Jake) Francois Boer was born in Cape Town, South Africa on 01/07/1975. Boer played club rugby in South Africa for the Villager Football Club and Cape Town. He starred in the same Western Province Schools and under 21 teams as former South Africa captain Corne Krige and star centre Robbie Fleck. After junior rugby came the smooth transition to the Western Province B team but following a prolonged spell injured, he failed to break into the Province’s senior side at the first attempt and, as an impatient and ambitious 20-year-old, he started to look elsewhere. Never one for taking the easy option Boer left South Africa and pitched up at Leicester where the resident back-rowers of Neil Back, Martin Corry and Lewis Moody rendered immediate progress into the first team virtually impossible. Leicester liked what they saw and offered Boer a three-year contract but the young South African was hungry for regular first team rugby as soon as possible, which couldn’t be guaranteed at Welford Road. They parted amicably in 1998 and he signed for London Irish where Dick Best had already spotted his talent and impressive attitude. Three happy years followed at Sunbury and Reading before the lure of European Cup rugby with Gloucester persuaded him to move to Kingsholm in 2000. With seemingly no prospect of international rugby for his native South Africa, Europe became the Holy Grail for Boer and the Heineken Cup was an enticing prospect.

It took him no time at all to become a cult figure at Gloucester, his battling, die-hard qualities immediately striking a chord with the Shed. Having become a first team regular Boer scored Gloucester’s only try in their 28-22 2001-2002 Zurich Premiership Final victory over local rivals Bristol at Twickenham, providing them with a wild-card European qualification after Leicester were crowned champions having finished top of the Zurich Premiership table. The following season the then Gloucester head coach Nigel Melville made Boer first team captain, which led to a successful spell for the Cherry and Whites before he gave up the captaincy in 2004. The 2002-2003 season saw Boer lift the Powergen Cup after Gloucester beat Northampton 40-22 in the final at Twickenham. The first time the club had won the trophy since 1982 when it was known as the John Player Cup. By the end of the season he had guided Gloucester to a top place finish in the Zurich Premiership table for the first time before they lost the Zurich Premiership final 39-3 to Wasps at Twickenham, the first time the Champions of England were decided using the playoff format. Despite this disappointment he was named the Zurich Premiership Player of the Season, as well as the Overseas Player of the Year. Topping a poll of 10 rugby journalists to win the award. He also ended the season as Gloucester’s joint leading try scorer with nine tries. The 2003-2004 season saw Boer lead Gloucester to a fourth place finish in the Premiership table as well as a 44-35 Zurich Premiership wild-card semi final victory over Sale at Kingsholm. The Zurich wild-card was contested by the teams placed fourth to seventh in the final table and despite beating Sale, Gloucester forfeited their place in the wild-card final after English teams were awarded an additional Heineken Cup qualification place due to London Wasps winning the 2003-2004 Heineken Cup. This additional place was awarded to Gloucester as the next highest placed team in the league not automatically qualified for Europe. Unfortunately the end of the following two seasons were marred by injury as Boer missed the 2004-2005 Zurich wild-card final defeat to Saracens at Twickenham and the 2005-2006 European Challenge Cup final victory over London Irish at The Stoop. Having helped Gloucester to a top place finish in the 2006-2007 Guinness Premiership table, he came off the bench after 15 minutes for Peter Buxton in the 44-16 playoff final defeat against Leicester at Twickenham.

Boer left Kingsholm at the end of the 2006-2007 season to return home to South Africa to re-join Western Province and to pursue business interests, having made 174 appearances and scored 30 tries for Gloucester after seven years service. His time back home in Super 14 Rugby didn’t work out and he had effectively retired from the game to concentrate on a tourism and leisure business in and around Cape Town, when an SOS call came from then Gloucester head coach Brian Redpath in October 2009. With a number of first team regulars missing due to injury, Gloucester needed to bring in back-row cover and turned to their former captain who was now 35 and willing to help his former club in their hour of need. Although his best position was 6, he was capable of playing in all positions across the back-row. The emergency contract he was given initially ran until Christmas, but was extended to the end of the season following some typically no-nonsense performances. He made a try scoring return in his first game back for the Cherry and Whites, coming off the bench during a 42-15 Heineken Cup defeat away against Biarritz. Boer captained Gloucester against Australia in his first game back at Kingsholm, demonstrating how valuable his experience and leadership skills were to the cause. He remained a key part of the squad for the remainder of the 2009-2010 season before being released by Gloucester after 8 seasons at the club over two spells. Following his final exit from Kingsholm ex Gloucester colleague and Cinderford director of rugby Andy Deacon persuaded him to join the Forrester in August 2010 as player/defensive coach. Whilst playing for Cinderford Boer was selected to play for the Barbarians coached by Brian Ashton against the Combined Services at the Army Rugby Stadium in Aldershot on 09/11/2010, in the 13th annual Remembrance Match. He ended his spell at Cinderford early in January 2011, returning to South Africa to attend to business interests.