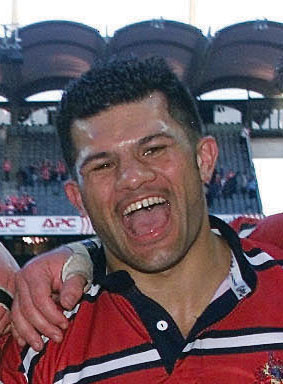 Robert Brett Todd was born in Auckland, New Zealand, on April 19th 1971. Like most Kiwis rugby soon became an obsession for him and such were his talents he quickly began rising up the domestic ranks. Fast gaining a reputation as a combative centre, Todd was selected to represent New Zealand at Under 16 and 21 levels.

By 1996 the game was beginning to break from its amateur shackles, and Todd wasted no time in joining the professional revolution by signing for ACT Brumbies in Canberra, Australia. But with so much competition for places at his new club, his eyes were opened to the possibility of a move to the northern hemisphere to ply his trade while on a pre-season tour to Europe. Unfortunately, having secured a move to London Scottish in England, his career on the other side of the world didn’t get off to an auspicious start. His new employers were forced to forfeit their place in the top flight due to financial difficulties, just as the game took its first tentative steps into a new era.

Thankfully, Todd had little trouble finding a new club in his adopted home, signing for London Irish in 1998. He had done enough in his short time in England to impress new exiles’ head coach Dick Best, who was searching for new recruits in his attempts to rebuild the club. After two productive years in Sudbury, during which he was named supporters’ player of the year at the end of his final season, Todd was tempted to join an ambitious Gloucester team in 2000 by the then director of rugby Philippe Saint-André.

He was unable to hit the ground running at Kingsholm after suffering a foot injury in a pre-season friendly against Munster, which consigned him to 9 months on the sidelines. Frustratingly, no sooner had he worked his way back to full fitness than a hamstring injury suffered in training ruled him out for the remainder of the season. Ironically the setback came after what proved to be to be his first and last game of the campaign against his former employers, London Irish.

Todd reported back for duty the following season fully rehabilitated and with renewed vigour, determined to put his previous frustrations behind him. He returned to the heat of battle in a pre-season friendly against French side Bezier, coming through unscathed. With his injury nightmares firmly behind him he soon became a permanent fixture in the Gloucester 1st XV, rather than on the treatment table. A centre by trade, he was now something of a utility player, demonstrating his versatility by covering most positions across the back line. Rather than concerning himself with labels, his pragmatic nature meant he was just grateful to be contributing to the cause.

It was a particularly good time to be at Gloucester, with results on the pitch leading to a purple patch for the Cherry and Whites. Todd was integral to the club’s success during this period, playing a part in two Twickenham finals, with mixed fortunes. He came off the bench to replace Henry Paul and help Gloucester beat Northampton 40-22 in the 2003 Powergen Cup final. A few weeks later he came off the bench for Terry Fanolua as Gloucester lost the inaugural Premiership final 39-3 to Wasps. That defeat was a bitter pill to swallow for Todd and his team mates, because it brought the curtain down on what had otherwise been a largely successful season, during which the club won its first silverware since 1982 and topped the Premiership table.

Philippe Saint-André, who had parted company with Gloucester in 2002, was now director of rugby at Sale Sharks. Fully aware of Todd’s many attributes, he lured him to the north-west at the end of the following season for a fresh challenge after 4 years, 60 Premiership appearances and 8 tries for Gloucester. Saint-André had assembled a strong squad at Sale, with the intention of challenging the country’s more established clubs for silverware. Todd and his teammates didn’t have to wait long for the Gallic revolution to bear fruit. Sale won a second European Challenge Cup in three years in 2005, with Todd starting the 27-5 victory over Pau at the Kassam Stadium in Oxford.

Having helped Sale to a third-place finish in the 2004-2005 Guinness Premiership table and with it qualification for the Heineken Cup for the first time in the club’s history, Todd started in the playoff semi-final defeat to Wasps. The following season Sale topped the Premiership table, before beating Leicester in the playoff final at Twickenham to be crowned champions of England for the first time. Todd had started 13 games in this historic campaign, before his season and ultimately his career was tragically cut short in March 2006, when he was diagnosed with skin cancer, a turn of events that forced the 35 year old to retire from the game with immediate effect, after 8 years in the English top flight.

With his world suddenly turned on its head, Todd had to turn down a scholarship from an American university that would have allowed him to combine training as a chiropractor with playing university rugby on the other side of the pond. With his post retirement plans shelved Todd was determined to return to the game he loved in some capacity, once his initial treatment was completed. Just 7 months after his diagnosis he linked up with Bournemouth RFC in a part time coaching capacity, combining his new role with his studies at the Anglo-European College of Chiropractic in Boscombe, before joining his former Gloucester colleague Junior Paramore as a rugby coach at Cranford School in Dorset.

Todd ran the London marathon in 2007 and completed the London Triathlon in 2010, raising money for Restart Rugby – the official charity of the Rugby Players’ Association – on both occasions, following the invaluable support they had provided him during his darkest hour.