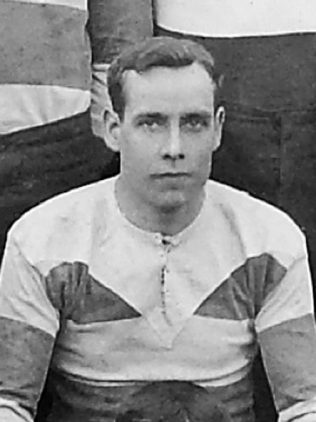 James Hamblin was born at South Hamlet, Gloucester in 1886, the second son of Thomas, a railway servant, and Ellen Hamblin. By 1901, James was employed as a painter in the railway sheet department of the Gloucester Railway Carriage and Wagon Company Ltd.

He first played for Gloucester in the Second XV against St Marks on 3rd October 1908, but it was not long before he made his debut for the First XV on 7th November 1908 at Northampton in a sensational 11-3 win against the previously undefeated home team. A week later he scored his first try in the 16-3 victory over Cheltenham at Kingsholm. He was then in and out of the First XV for three seasons, playing 31 games for the First XV, and at least 36 for the Seconds, during the 1908-11 seasons. At the end of the 1909-10 season, WB of the Citizen expressed some disappointment in writing that “J Hamblin was called upon a fair number of times, but did not come up to expectations”. However, one of the highlights of his playing career came with a trip to France, where he took part in the 18-13 defeat of Stade Toulousaine on 28th February 1911.

James enjoyed the golden season of his playing career in 1911-12, by which time he was working as a labourer at the Wagon Works, as were his four brothers. He secured a permanent place in the First XV, making 26 appearances and scoring six tries. By this time, his brother Lionel had broken into the Gloucester side, and the brothers often played together as the centre partnership. Both brothers scored tries in the 25-8 defeat of Clifton, and James scored the try and Lionel converted it in the 5-19 loss at Newport. The brothers also played together when the Club made another foray across the Channel to beat Stade Francais 13-3 on 14th March 1912.

The good form of James for Gloucester brought him to the attention of the County selectors, and he made his debut in Gloucestershire’s 8-5 defeat of Monmouthshire at Kingsholm on 12th October 1911. With Gloucestershire already out of contention in the South West group, James made his only appearance in the County Championship against Cornwall at Redruth on 9th December, which resulted in defeat 0-15. He was also chosen for Gloucestershire’s trip to Dublin, where he played in the 6-20 loss to Dublin County on 13th January 1912. It proved to be his final County cap.

James married Maud Haines in 1913. At the start of the Great War, he signed with the Gloucestershire Regiment. He sailed from Avonmouth in June 1915 bound for Gallipoli, where he landed the following month. He was wounded during fighting in the Dardanelles, and evacuated to a hospital in Egypt. After he recovered, he was transferred to the Ypres Salient on the Western Front. He died in Gloucester on 11th May 1948, aged 62, and is buried in Hempsted churchyard.